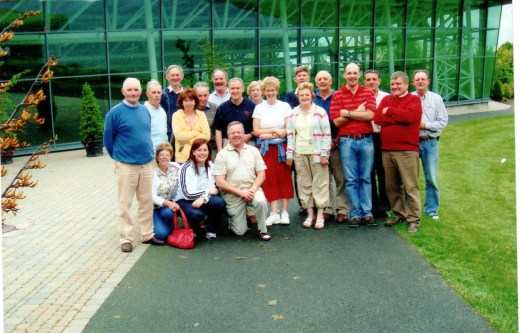 Conna Community Council was initially responsible for introducing short mat indoor bowling to Conna. Its Sports and Promotion Sub-Committee, under the chairmanship of Dermot O’Leary, were looking at ways of making full use of the facilities available in the Sports Complex and in 1990 they decided to check out indoor bowling and see what it entailed.
On 7th October 1991, a formal meeting was held and the Conna Bowls Club was formed. The following were elected: Chairman – Fr. Denis Stritch, Vice-Chairman – Dave Feeney, Treasurer – Joe Eaton, Assistant Treasurer – Barry Rumley, Secretary – Tom Finn, P.R.O. – Derek Feeney. Committee Members Sheila O’Leary, Helen Lane, Jerry Hennessy, Dermot O’Leary and Mick Lynch.
The first A.G.M. of the Conna Bowls Club was held on 28th September 1992 and Fr. Denis Stritch was elected Chairman, Dave Feeney as Vice –Chairman, Secretary-Tom Finn, Treasurer-Joe Eaton, P.R.O. Helen Lane and club delegates-Michael O’Regan & Dave Feeney.
Since the A.G.M. the club has gone from strength to strength and continues to be involved in all the activities of the Cork Zone whether in competitions or administration.

Adrian received his award at the Cork Indoor Sports Association Dinner which was held in the Gresham Metropole Hotel on Friday 17th April, 2015.
This has been a great season for Adrian. He was a member of the Irish selection that won the British Isles Short Mat Bowls Championships and ‘A’ series. The matches were played at the Llanelli Leisure Centre in Wales on Saturday 15th and Sunday 16th November 2014. This is an annual tournament which features Scotland, England, Wales, Ireland and the Isle of Man. Adrian was the only player selected from the Cork Zone of the IIBA.